The Medellin Flower Festival and the Amazing Silleteros of Colombia

NOTE: There aren't very many English-language guides to the Medellin Flower Festival nor the silleteros whom the festival celebrates; that's why this document is useful. There are a few, though, and they are linked at the bottom.

If you happen to find yourself at the Flower Festival in Medellin, Colombia, you'll end up smashed against a chainlink fence on the sidewalk of a central thoroughfare in Medellin, Colombia, surrounded by thousands of Colombians and tourists cheering on a lengthy parade of old men and women. You'll be confused. That's alright. The sun will be glaring and the temperature will be hot, and yet these men and women will schlep for miles down a winding parade route, carrying behemoth pallets of flowers on their backs.

I want to double down on two points here:

The story goes that on a spring day in the 1950s, a man named Arturo Uribe noticed the silleteros descending from the surrounding hills outside Medellin to sell their flowers in the city center. Uribe was a member of the Board of the Office of Development and Tourism in Medellin, and he thought the visual was both stunningly beautiful and an accurate reflection of an important component of Colombian history. And so, in 1957, he and the Medellin government sponsored the very first Flower Festival. That 5-day celebration has grown over the years (some 30,000 tourists and a hefty portion of the 2.4 million residents of Medellin attend every year), but the flower parade on the final day has always been its cornerstone.

It makes sense, really: Colombia is the world's second-largest cut flower producer, behind The Netherlands (75% of their exports go to the United States).

But who, exactly, are the silleteros, and why are they saddled with pallets of flowers? 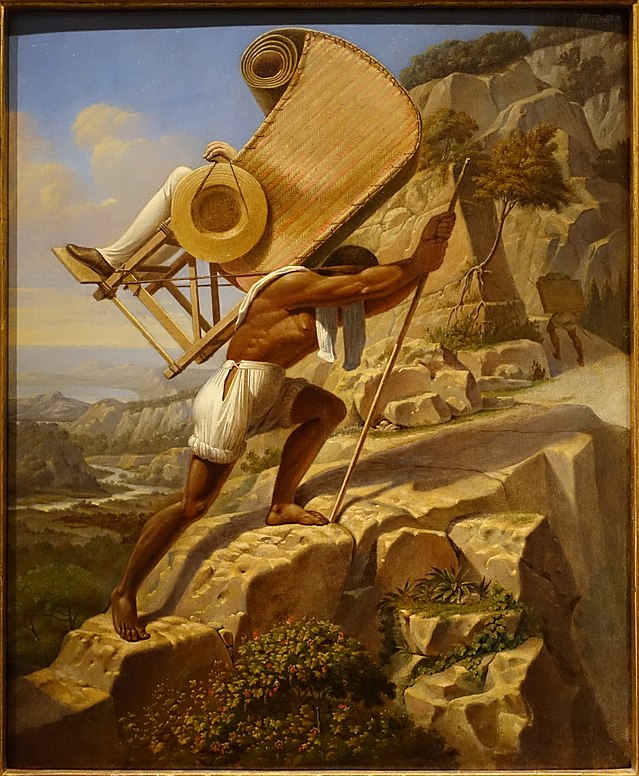 The silleteros are a fascinating and somewhat dark piece of Colombian culture and history. A class of indigenous porters, these men and women carried gear, goods and often people through the mountains in the Colombian Andes. At first, their role was mostly to carry sick people from mountain villages like Santa Elena and into the city for medical treatment. But in the times of Spanish colonialism, their expertise was grossly exploited, both by the invasive foreigners and wealthy Colombians.

Now is a good moment to note that "silla" translates to "seat" in Spanish.

The silleteros found themselves relegated to something of a subhuman indentured servitude through much of the 18th and 19th centuries, tasked with carrying upwards of 150-200 pounds of goods, gear and wealthy explorers (yes, human beings) through the most treacherous of mountain passes deemed too unstable for horses (among these treks is the famed Quindio Pass through the Andes).

In his obnoxiously-titled book, Journal of a Residence and Travels in Colombia During the Years 1823 and 1824, Charles Cochrane of the British Royal Navy (who refused to mount the silleteros) wrote: "I have been told that the Spaniards and the natives mount these chairmen with as much sang froid as if they were getting on the back of mules, and some brutal wretches have not hesitated to spur the flanks of these poor unfortunate men when they fancied they were not going fast enough".

"He also noted that most silleteros died before forty from “a ruptured blood vessel.” This in its day was the equivalent of a flat tyre; a burst porter on the mountain pass. In fact there was even a word for it at the time,emparamado, to die on the high Andean grasslands." (Source)

Colombia officially declared its independence from Spain in 1810 to form the Junta de Santa Fe (though the development of the Republic of Colombia took far longer). The precise timeline of decreasing subjugation of silleteros is difficult to pin down online, but it seems that in the ensuing century, the silleteros returned to their routes and farmers and porters. As Colombia's flower business expanded, the silleteros gained back a modicum of prominence, leading to the eventual establishment of the Flower Festival.

This website doesn't really try to get you to pay money. I just want you to listen to my travel and storytelling podcast, Baggage Claim: travel stories no one tells. I just like telling stories.

Former political software guy. Now a traveler and adventurer, which isn't a job, and host of the @heybaggageclaim podcast, which really isn't either. Travel stories no one tells.

Sign in with or
Don't have an account? Click here to create one.
Please check your e-mail for a link to activate your account.
The Amazing Silleros of Colombia
The Medellin Flower Festival and the Amazing Silleteros of Colombia
I'm listening to the @heybaggageclaim podcast: travel stories no one tells. @heywillconway is telling them. Check it out.